It's really hard to make a living as a freelance writer. Yet, some still manage to pull it off, sometimes against all odds.

While native English speakers with university degrees are struggling to get clients, Onibalusi Bamidele — a teenager from Nigeria — is pulling in over $50,000 dollars a year in freelance writing income. Moreover, Bamidele is convinced that his success can be replicated, that other writers can use the same methods to get their freelance writing businesses off the ground.

Let's look at how this energetic teenager went from an academic failure to a successful freelance writer in just a few short years.

Why Failing Big, Opened Up a Positive Path

In 2009, at age 15, Bamidele experienced a major setback: he failed a national exam which he was convinced he would pass.

Bamidele was never a big fan of formal education. He kept asking adults “Why do we go to school?” But like many youths with an entrepreneurial spirit, he never got a satisfying answer.

The teenager knew that most people get academic credentials as a milestone step toward making money and supporting their families, but he started wondering, what if he could find a way to make money and create a good life for himself without the diploma?

Failing the exam pushed Bamidele over the edge. He wanted to prove to everyone that he could make it outside the bounds of formal education, and so did some serious research on alternative career paths.

It didn't take long for Bamidele to stumble upon blogging: he read one of Steve Pavlina's articles on the topic and decided to give it a try. Bamidele started his blog Writers in Charge at age 16 in April 2010 without a clear plan, but with a willingness to work hard. 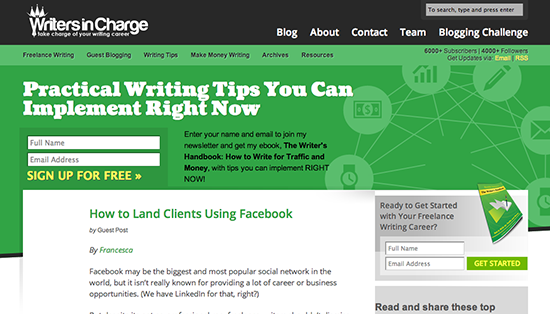 He knew that in order to make money, he needed traffic, and that a good way to get traffic is to write guest posts for bigger websites, so that's what he did.

By December 2010 he had written over 270 guest posts (no, this is not a typo, it's really over two hundred seventy guest posts) for other websites, and was getting over 9000 unique visitors a month to his blog. That's when things changed.

I would have written fewer guest posts in a more strategic way. There wasn't really a need to write that many guest posts. In fact, around 10 to 15 guest posts on the right blogs would have put me in a good position.

$100 Per Article: The Client that Started It All

Bamidele had no intention whatsoever to work as a freelance writer when he started his blog. Like too many people new to the field, he believed that freelance writers were working for three dollar an article on Elance and oDesk. So, it didn't seem like an appealing career path. However, one guy who asked for help with several websites caught his interest, and they agreed to meet on Skype. What Bamidele didn't know at the time was that this meeting would change his life.

How much do you charge per article?

Bamidele didn't know what to answer since he never did any freelance work before. He thought maybe $30-$40 per article would be a good rate. That seemed like a reasonable rate to pay for a teenager from a third world country with no previous experience. However, instead of answering the question, Bamidele asked the client what he had in mind.

Well, we pay our writers $100 per article, does that work for you?

Bamidele accepted the offer. He couldn't believe it, though: did his client know what he was doing? Bamidele even worried that maybe he was cheating his client somehow and would get caught soon. However, when payments continued for several months, he realized that this was a real opportunity. He decided to give this freelance writing thing a serious try.

Bamidele's advice on promoting your services:

Bamidele decided to add a “Hire me!” page to his blog a few weeks later after landing that first client. He had to take it down, though, since the client saw it, and offered Bamidele a lucrative contract, with a condition that he will not work with other clients. This contract lasted for about a year. Bamidele made over $50,000 in 2011 working exclusively with that first client.

In March 2012, once that contract was over, Bamidele decided to add a “Hire me!” page to his blog once again. That turned out to be a great move: he started getting 5 to 10 high quality work offers a month from then on. In 2012 alone, he got over 60 client requests through his “Hire me!” page, worked with around 12 clients, and made over $50,000 from freelance writing that year.

At the moment, Bamidele is 19, and he continues to run his successful freelance writing business. He has worked with around 16 clients this year so far and is on track to earn much more in 2013 than he did during the previous years. Bamidele is also working to take his blog to the next level: he hired a team of talented writers, is making many changes, and looks forward to seeing his blog become an A-list website for writers, as well as the foundation for his future ventures.

Here's what Bamidele told me when I asked him what is his future vision for himself and for his business:

I'm starting to realize how much impact being a focused person can have on my life, purpose, and career. As a result, right now, my vision for the future is to be a more focused person, both in business and in personal life.

I wouldn't sign a deal to work exclusively with one client again; this benefited me in the short term, but in the long-term it almost resulted in problems when the client wanted to reduce how much he was paying me. By controlling how many clients I work with, and how I work with them, I now easily prevent a lot of problems.

Wait.. Maybe All of This was Just a Fluke?

Many people who made it as bloggers owe their success on some level to luck. Bamidele had the same sort of question about circumstance and his success. So, decided to start his blogging challenge to see whether his success was found in his method.

He started an experimental blog from scratch, with a simple goal: to turn it into a lead and income generator in six months, without using his previous success as a stepping stone (he didn't use his name, didn't use his e-mail list, didn't even link to his experiment blog from his main blog).

Well, here's what happened, take a look at this table: 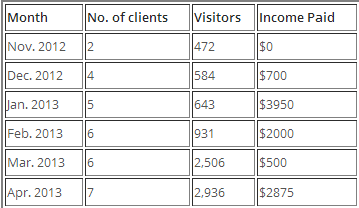 This experiment made it clear that blogging is a great way to kickstart one's freelance writing career. Sure, it's unrealistic to expect clients to come knocking at your door after one month, but it's definitely possible to turn your blog into a source of leads and income in three to six months, even if you are starting from zero. This experiment proves that.

Bamidele’s advice to freelance writers who are just starting out:

My challenge blog revealed the importance of blogging strategically if you want to get clients; with my new blog, I got my first client exactly one month and ten days after starting it. I got my second client two days after; I achieved this with a total of less than ten blog posts and guest posts written, doing a fraction of the work I did on my first blog when I started.

The Benefits of Marketing Online

Educate yourself about effective online marketing strategy in order to avoid newbie mistakes and speed up your progress. Read everything at Social Triggers, from the first post to the last post. Then expand your horizons, and check out other valuable online marketing resources.

Build a Platform that Pulls Clients to You

It can be difficult to connect with clients who are willing to pay decent rates. Back in the day, your competition were writers in your town, maybe writers in your country when it came to big publications. Today, you are competing for the same jobs with people from all over the world who can afford to work for less than you because their living expenses are much lower than yours (by the way, this applies no matter where you live, even if you are from Bangladesh, there are plenty of people who are willing to work for less than you). This is clearly a losing bet.

Your time and energy are much better spent building a platform than competing on marketplaces for low paying writing jobs. In dating, would you rather be that one who's desperate to get any kind of attention, or the one who is attractive, gets asked out constantly, and therefore has plenty of options?

It's the same in freelance writing: you don't want to be chasing clients, you want them to be chasing you. Spend the next three months building a freelance blog platform that will get you constant stream of quality work offers.

If you're new to freelance writing, we recommend a number of introductory tutorials to get you up to speed:

If you're interested in getting some help with your writing project, Envato Studio has a great collection of freelance writers offering services that you might like to explore.