Are you tired of slaving over your blog posts, only to find you end up with seven readers?

If so, you need to change what you're writing about. Probably where you're publishing it, too.

That's the word from Copyblogger associate editor Jon Morrow, whose own new site is the wildly popular Boost Blog Traffic.

Jon is a longtime mentor of mine, and I had the privilege of meeting him in person and attending his presentation on how he gets big traffic at the New Media Expo (formerly BlogWorld).

He's the author of three separate blog posts that have notched over 100,000 views, including On Dying, Mothers, and Fighting for Your Ideas.

In his NMX session, he analyzed the success of his big posts and spotlighted five elements the posts all have in common that helped them get massive traffic:

1. Write Something that Changes People's Lives

Most bloggers write about what's going on in their own lives, without much focus on whether it's helpful to readers. Instead, think of what you could write that would make readers' lives better.

Can you give them hope? Teach them how to make more money? Help them have happier marriages? Think of what important life change you could create for readers.

"If you do this right, it will change your career forever," Jon says. "People will remember, and talk about the post, and follow you forever. So write something worth remembering."

Most blogs have a niche topic they discuss. But for your super-viral post, think of where the intersection is between that topic and a broader topic -- something nearly everyone can relate to. In the case of Jon's post above, his topic is illness, life and death...and how his own illness and survival have shaped him as a blogger.

While not everyone blogs, everyone has a finite life span and is interested in the issue of mortality. And everyone has a mother! So this post immediately had a broader potential audience than a typical post about blogging.

"I intended for that to happen," Jon explained. "You need to plan how people are going to feel about your post."

Why do you want to trigger these violent, uncontrolled emotions? Because tapping those emotions creates a strong connection between you and the writer --and because people tend to share more when they're emotionally moved.

How do you know you're getting it right? You'll get the occasional email or comment from a reader who's so mad at what you wrote that they are quitting your blog. "I'm happy when I read that," Jon says. If you're not provoking anyone, your writing is probably too bland to attract a big audience.

There are a million blogs out there. To grab people's attention, you have to tell them something they haven't read other places before -- something that wakes them up. In Jon's post above, it happens when a doctor tells his mother he will die in babyhood...but she refuses to believe it.

Build suspense and then reveal your surprise. You'll have readers on the edge of their seats.

"Say things people do not expect," he says. "If it's expected, it's boring."

Many bloggers tend to save their favorite ideas and posts for their own blog. But that won't get you wild virality. Instead, write your hottest, most provocative ideas as guest posts for the biggest blogs you can, Jon says.

On a popular blog -- for Jon's niche places such as Copyblogger and Problogger -- you will get orders of magnitude more traffic than you would on your own, smaller blog.

From there, you'll have a better chance of catching what Morrow refers to as "the jetstream of traffic" -- a huge crowd that troops over from Twitter, StumbleUpon, or other social media platforms to view your post, and from there goes back to your own blog to check you out. Those new readers then grow your own blog's audience (and can be a great way to get you the exposure that leads to more freelance writing gigs, too.)

To get the most mileage from your big guest post, build relationships with prominent bloggers in your niche beforehand. Comment on their posts, offer to guest post for them, connect on social media, and respond to what they say.

If you know 20 big guns in social media, you can send them each your provocative guest post. Then you can sit back and watch it draw a huge crowd, thanks to the influence and larger audience of your big-blogger friends.

If you think you can't break in and guest post for big blogs, try them, Jon says. You may be surprised at how receptive they are. Guest posting is a great way to build relationships with top bloggers. 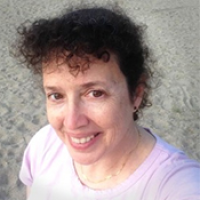 Carol Tice
Carol Tice has been a freelance writer since 2005. Her Make a Living Writing blog was named a Top 10 Blog for Writers in 2010 and 2012. She serves as Den Mother of the 600+ member writers' community Freelance Writers Den.
Weekly email summary